An extensive report by AllSides reveals Google News is biased against conservatives.

In August, President Trump claimed Google is “rigged” against him, and that Google is “suppressing voices of conservatives.”

AllSides’ 39-page Google News Bias research report has gained coverage in nearly 70 media outlets nationwide, including USA Today. In it, we reveal Google news bias is heavily Left-leaning, but there is no evidence to suggest this is intentional.

Google News bias may be due to the fact that most online news comes from a Left perspective. Online news consumers are also younger and lean farther Left than the average American, which directly impacts which articles Google’s algorithm selects and how high it places them on the page. But is this serving Americans, or just polarizing us further?

“Google has a serious decision to make,” said AllSides President John Gable. “Do they just want to reflect the most popular content online, or empower people to think and decide for themselves by providing a diversity of perspective and thought?”

The study included 123 different measurements of Google News bias over 14 days, from August 23 to September 5, 2018. Eighty-eight of those measurements looked at the number of links that pointed to left or center or right media sources. We considered the location of these links, giving the top 5 links more weight than others lower on the page.

Because the vast majority of traffic goes to the very first links displayed on Google, we looked at link position for content coming from sources with a Left, Center and Right media bias rating. The aggregate result indicates that the overall bias of Google News is 65% Left, 20% Center, 16% Right. 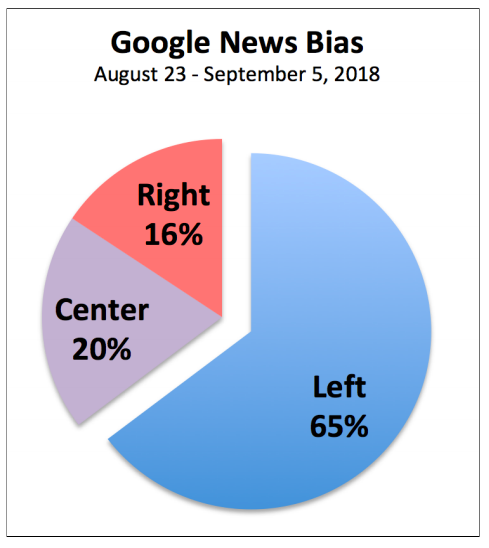 On average, we found Left outlets were consistently among the top two Google News results. Center outlets were in the top five or six results, and Right outlets appeared at 12.2 — below “the fold,” meaning that users would have to scroll down the window on their computer screen before they would see them.

When we browse information via online technologies — such as search engines and social media — there is a spotlight on the most popular perspectives, or perspectives that confirm our existing beliefs and biases. This can hurt our ability to be exposed to new information and ideas, challenge our beliefs and decide for ourselves.

What do you think — is Google news bias contributing to political polarization in America? Should Google be a popularity algorithm, or empower us to see multiple perspectives?